the rug that used to be a blanket…

The other day my father asked me if I wanted to look at some rugs he had stashed away in his attic. I went up to take a look because I’m not the kind to turn down a free rug. Packed away inside a suitcase he had some rugs which were nice, but not what I was looking for. The rug was too dark and had a harsh wool texture. They actually reminded me of a military bedroll from the 1930’s. I caught some colors out of the corner of my eye that were under the rugs I was being shown so I asked him what it was. In the other section of the same suitcase were some wool blankets. One in green and one in brown. My father explained that he had purchased them years ago in Greece to use in his furniture showroom. I knew they looked familiar since I spent a lot of time in the showroom as a child. 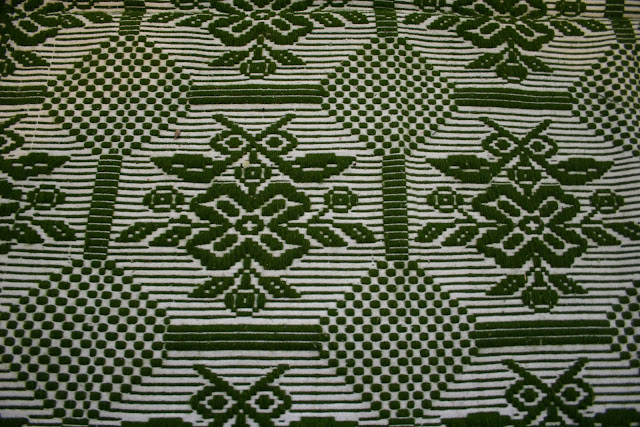 The showroom was in Harvard Square full of the contemporary furniture that my father designed and built along with my uncle. Back then I didn’t know how fantastic it really was to be in that location alone. The showroom was full of bunk beds, beds, dressers, night tables, dining room tables, buffets, sideboards, chairs and more. The beds were made with sheets from Marimeko and blankets like the one I had just come across. 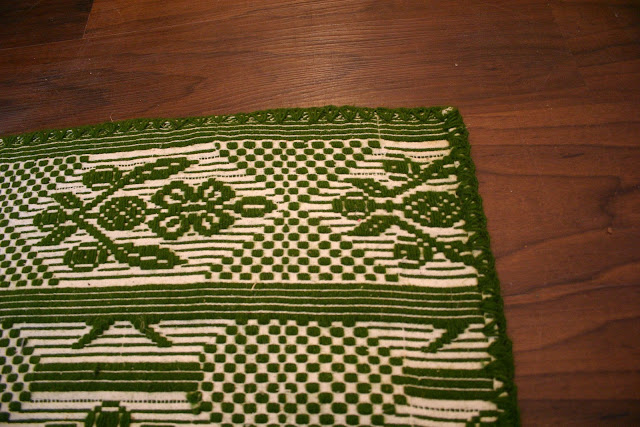 I got very nostalgic and excited seeing the blankets. Nostalgic because they brought back all these memories and excited because they were in a suitcase in my parent’s attic which meant they were up for grabs. I asked my dad if I could have them but not as blankets. I wanted to know if I could use them as rugs. I asked a couple ways just so all my bases were covered. If he said okay they would be used in a home with three kids and a dog. A lot could happen to them!
He was just happy they were being used. The brown one went straight to the master bedroom… 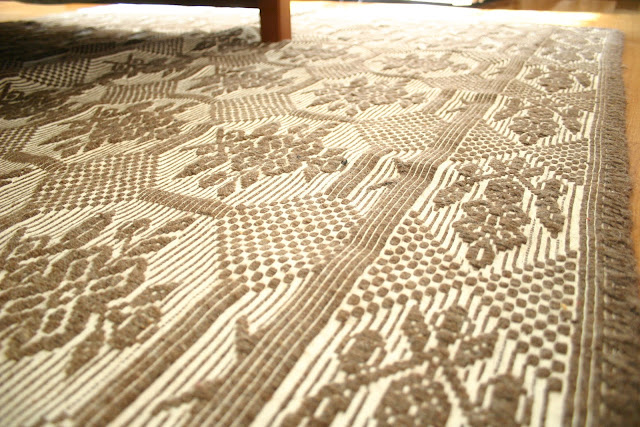 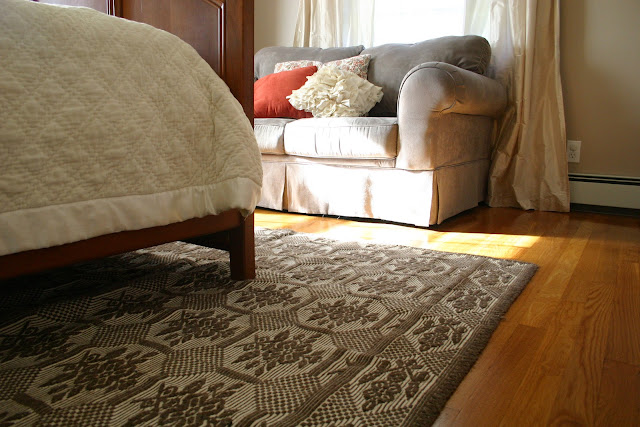 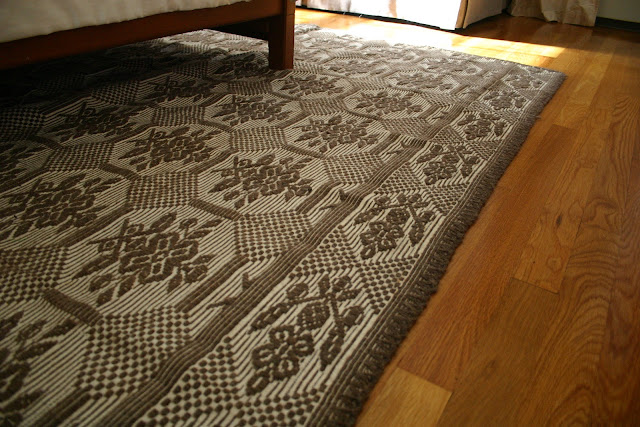 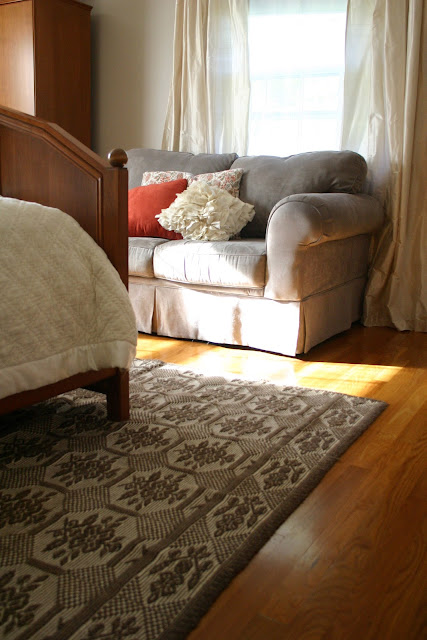 and the green one went in the guest room…. 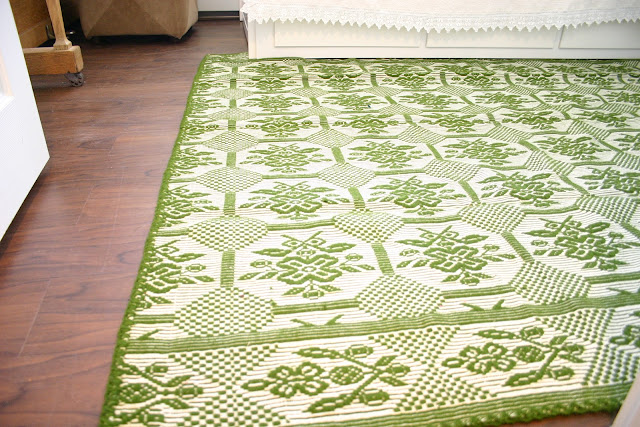 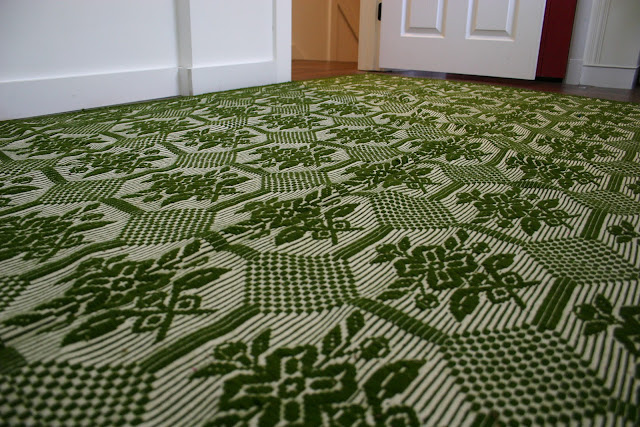 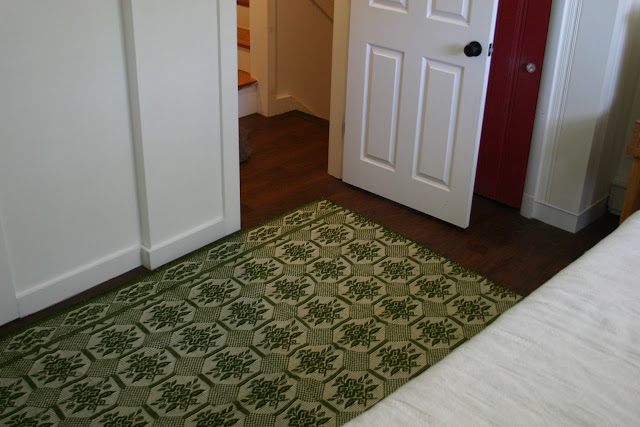 The wool had an intricut pattern and the “rug” itself is very flat. As a blanket it would be thin and itchy. As a rug it is perfect.
Upon seeing it both my siblings and their spouses all asked the same question, “Dad didn’t mind?” We all have our own version of that blanket not being used somewhere. Now we all have new rugs.
So the moral of my story is this. What do you have around your own home that could be better used elsewhere. Just because it is a nice blanket doesn’t mean it won’t make a gorgeous rug.