My six year old was sick the other day and confined to the sofa. He settled himself down and got cozy, then selected something to watch. His show of choice? The French Chef with Julia Child. For anyone who knows him this is ironic on two levels. First of all, he is the most energetic child imaginable. I would have expected football or Power Rangers. Second, calling him a picky eater is putting it kindly. I wish he were a picky eater. He is beyond picky. He still chose to watch the French Chef marathon going on because he wanted to learn about cooking. Ironic doesn’t even begin to describe this scenario.
As I sat down with him I was struck by the wall surrounding the ovens, on the left side of the set. I did some searches online but have not been able to find a good image, just these… 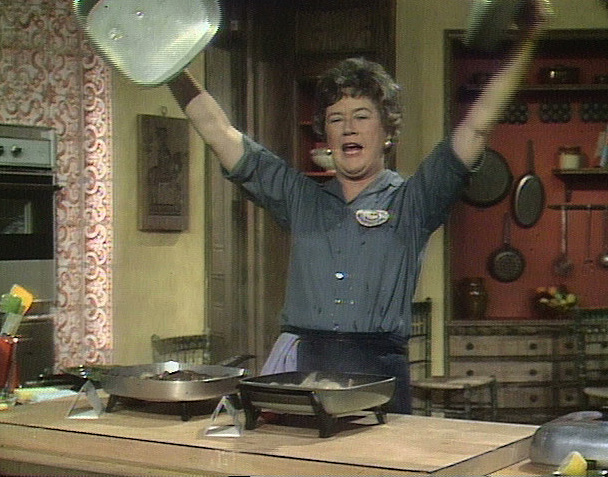 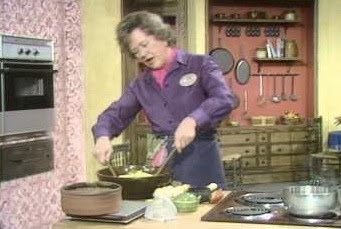 I’m not sure if that was tile or wallpaper surrounding the oven, but after seeing it on the television it seems to have a metallic tint to it with a fuchsia background. Something like the following on a smaller scale. 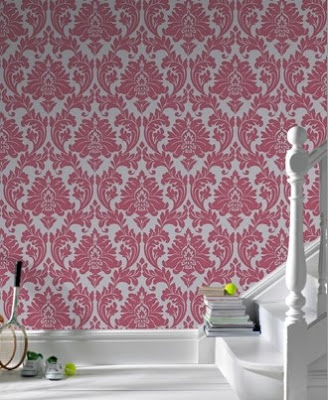 Very hip and up to date. Not bad for a television series that ran from 1963 to 1973, here in my very own city of Boston! The set was designed by Francis Mahard in a French country style combined with a rustic look. Mahard filled the kitchen with jars, pitchers, plates and other accessories, all found in antiques stores throughout Boston. Forget the fact that the stove top was dark brown and the counters were wood laminate, the oven wall could fit in any room these days. Wallpaper can get pricey but there is another option.  Stencil, anyone?