I’ve always shared my current projects in various rooms of my home through posts, but I’ve never actually showed you my home from top to bottom. Today I’m going to begin a house tour. Every Friday I’ll be sharing another room. Most are finished, for now at least. A space is complete only until I get my next idea!
Throughout the tours I’ll share some of the minor cosmetic changes we made when we first moved in three years ago. We only did one major job when we first bought the home. We changed the furnace and zoning for the heat from one entire zone to 4 zones, one for each floor. Sounds huge, right? I’ll explain why we have four floors. Zoning has saved us a bundle by not heating the whole space all at once.
Let me begin by describing the type of home I have. It was built in 1955 and is a multi level home in the  traditional style. Lots up moldings and details which I love. Each floor is actually half a floor. The living rooms sits above the basement level. The bedrooms sit above the lower level.
The front door and main level of our home is 6 steps up from the ground. The main level is comprised of the foyer, living room, dining room, kitchen and three-season porch. Six steps up from the foyer is the bedroom level. It is not a full flight of stairs so the upstairs level feels very connected to the main level. We have three bedroom upstairs as well as two bathrooms and lots of closets. Five to be exact.
Six steps downstairs from the foyer is the lower level. It is on the ground level and consists of the guest room, mudroom, a half bathroom and the garage.
Another six steps down from the lower level is the finished basement, which is the only large renovation we have done since moving in. Our house looks smaller from the outside than it actually is. My first impression of our house when I first walked inside was that it just kept going and going. The addition of the basement renovation has taken our square footage from 1800 square feet to about 2200 square feet.
So now that you have some background information, let’s begin.
First room on our tour and on the other side of the lovely blue door is the foyer… 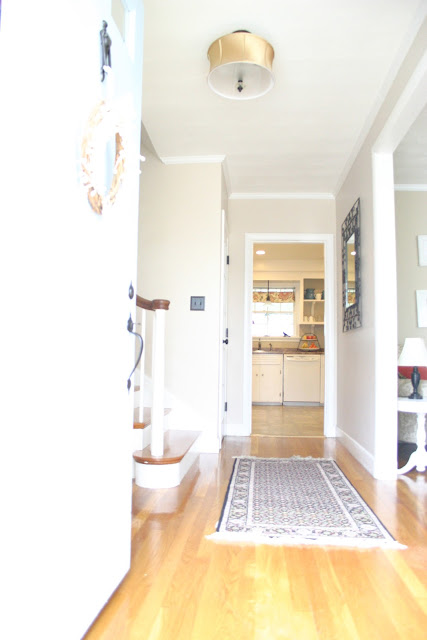 I made four simple yet high impact changes to the foyer. These were all inexpensive changes which really transformed this space. Here is what the foyer looked like in the listing so you can see what I started with. 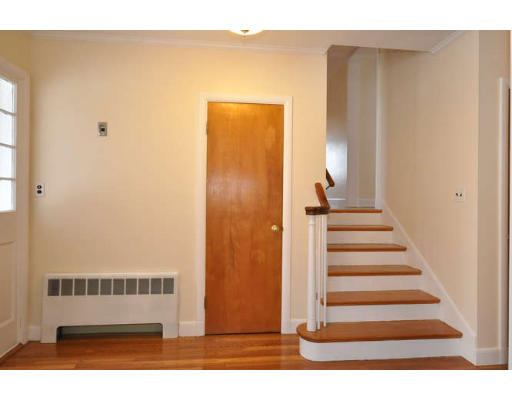 First of all I painted it. The foyer paint color is Benjamin Moore Brandy Cream. It is a warm neutral that feels fresh and inviting. It looks fantastic in all sorts of light and continues on into the upstairs hallway. 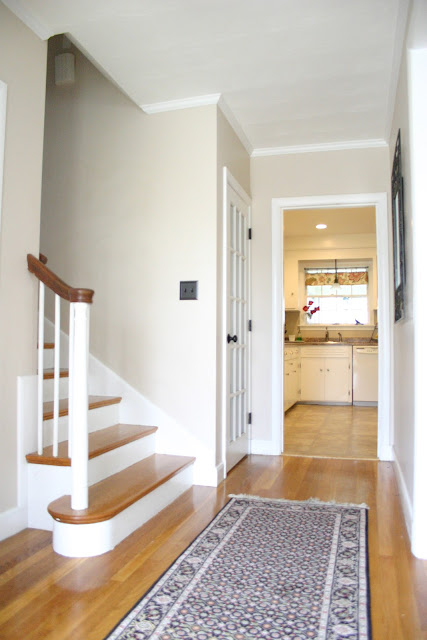 After painting I changed the doors. We were going to changes the doors throughout the entire house. They were those hollow wood doors with an horrible finish that didn’t go with my color scheme. Switching out every door would have cost a lot. My solution was to just change the foyer closet door as well as the door leading downstairs. I felt that those were the two most visible doors. Changing them out would make the most impact and we could save a lot of money! The rest of the doors we just painted. The closet door was taken out and switched for a more traditional solid pine door, painted white. Black hardware was added as well. 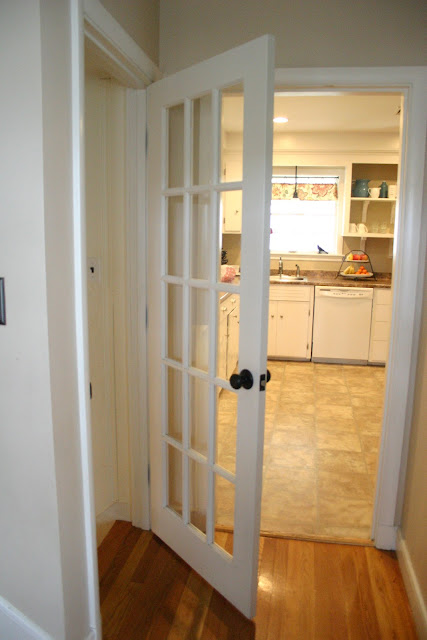 The door leading to the lower level, which used to be the same type of hollow wooden door found everywhere else throughout our home, was replaced with a glass french door. This added some light and flow to the lower level. The room which was originally at the bottom of the stairs on the other side of the door used to be the playroom. My children would never have gone down there to play if a heavy door was at the top. Replacing it with the glass door meant I could see them with a quick peak down the stairs. I could have removed the door altogether but it actually is great for a number of reasons. First of all I still had a crawling baby when we first moved in so I didn’t have to worry about any tumbles down the stairs. We also needed some sort of sound barrier once we redid the basement and took off the door at the top of those stairs. The third reason is that when we leave the house, the dog goes downstairs and the door is closed. I’ve found her lounging on my nice tufted sofa a couple times so I can only imagine what she might do when we are not home. 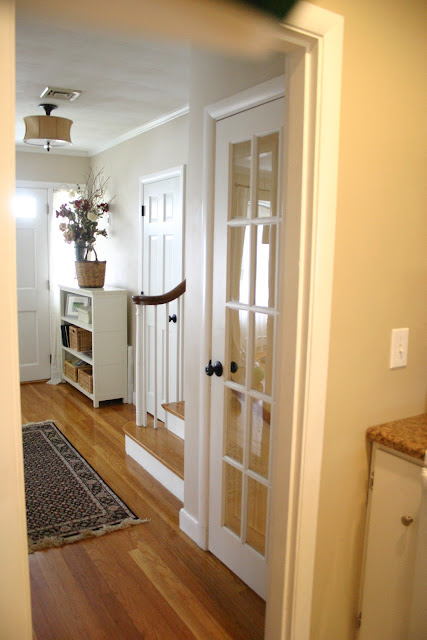 The next simple change I made was the lighting. Before we moved in the whole house consisted of the kind of ceiling lamps which I can only describe as resembling a certain part of the female anatomy. You know the ones. I got rid of all of them. I bought this ceiling fixture at Home Depot complete with a diffuser. I love the warm glow of diffusers. 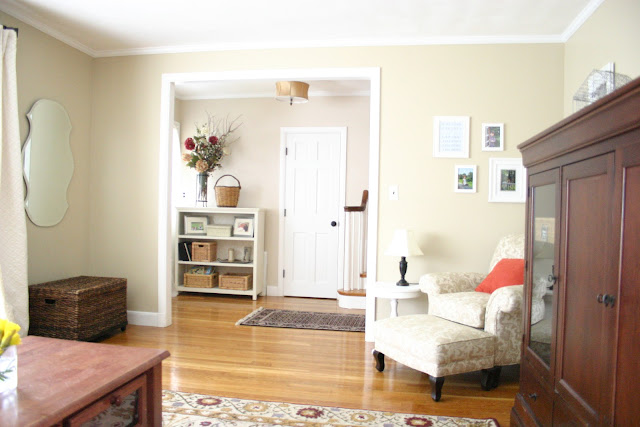 The last change I made was replacing the switch plates to match with the new door hardware.  I actually found these ones at Target. 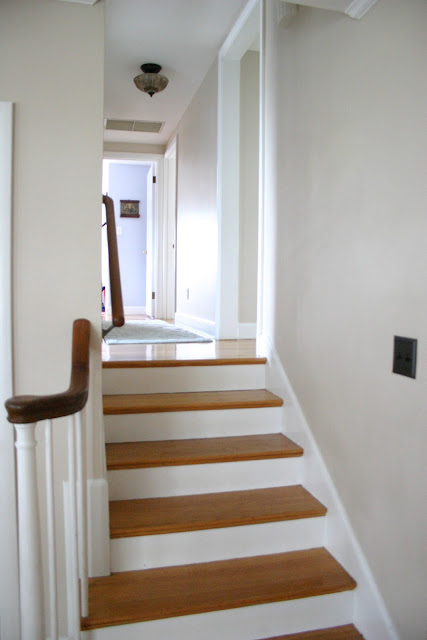 After that I accessorized. A rug, a bookcase and a mirror, all of which I already had, were added to the space. That was it. The foyer is now a welcoming entryway that was made even more comfortable by just a couple simple and cost effective changes.
Join us next Friday for another tour, the living room.